Breathing, it’s something we all have in common, without it there would be no life for our physical bodies but most of the time we don’t think about it much, simply take it for granted. Our breath is an incredibly potent tool for healing and  can launch you into a thousand different worlds, other realities. That this has been known for thousands of years can be seen in the yogic traditions of pranayama, up until 1386 it could also be found in the english language in the word conspire, which meant to breathe together. Then this powerful concept was hijacked and the notion of conspiracy was born, instead of breathing together we were plotting and generally up to no good! 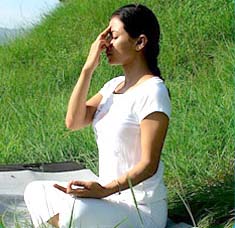 Breathwork has been a big part of my self-development and growth, it’s given me great understandings, and  it’s facilitated the release of enormous amounts of my excess baggage. There isn’t a baggage retrieval system in the world that could cope with the amount of luggage I’ve left behind, all that weight it’s a wonder I could lift my feet from the ground in order to walk.

I went into that session feeling a bit like a ghost, I came out feeling calm, full of light and incredibly expanded. In the session I was aware of touching on different past lives as well as aspects of my current biography, not going in to the stories, but being aware that the basic issue of  betrayal and not being able to trust was present in them all. I felt enormous amounts of energy moving in my body and being released, it’s such a wonderful feeling!

There were a couple of days of a little bit of dis-ease in the belly and then clearing it, part of the process of integration I guess, my yoga class was really helpful for this. And now I am in a new house sit and have the space to continue the integration which is such divine timing. I’ve definitely done some good work clearing but I know there is another big lot of stuff to move out and my next breath session will be next week, with the friend I asked originally.

It’s so important to know when to ask for help, I couldn’t have managed this last bit on my own, thank the Goddess for the wonderful supportive community I find myself resting in. Let us all conspire together, for peace, for love and for the birth of the new humanity!