Slithering Blissings: From Deepest Despair To The Brightest Of Joy!

I woke the following morning with things to do and no sign of the python so I opened the front door and left the connecting door closed hoping that the snake would take the opportunity to escape. There was no sign of it that day or the next and I began to hope that it had indeed slithered its way out of the house because I still had no idea what to do with the darn thing. I wasn’t frightened of it but I had no idea what to do with it, I knew that pythons are not aggressive or venomous but I didn’t really know how it would react if I tried to pick it up.

On the sunday evening I had been out all day and when I turned the light on for the front room lo and behold, there was the python, curled up on a pot plant crushing the life out of the poor thing. This was the closest to the door it had been, surely there was some way I could get it to go out the front door. I got a broom and tried poking it but the snake merely raised its head and looked at me with its tiny eyes, what to do? Then I had a brain wave, the pot plant was on a small table and so I pushed the table over to the door. I had to push the table half way out the door but the snake eventually got the idea and slid its way down onto the verandah and slithered away into the night, thank the Goddess, I had managed to solve the problem all by myself.

The Midsummer celebration in Ancient Gaul was called the Feast of Epona, named after a mare goddess who personified fertility, sovereignty and agriculture. She was portrayed as a woman riding a mare.

A good story to dine out on, but of course there is a deeper understanding that may be gleaned from this tale, the snake is a symbol rich in meaning and it came into the house for the Solstice 2012, very powerful medicine indeed! To find out the meaning for me look for my next post, Slithering blissings to you all………………… 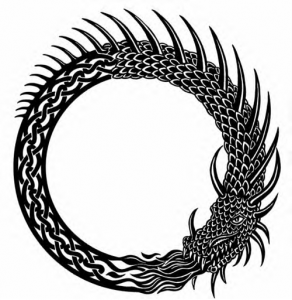 Slithering blissings indeed! I was about to embark upon a year of incredible learning ushered in by snake medicine, culminating at the Spring Equinox in September 2013. I did not know then that a part of my journey was truly coming to an end. But before I finally came together with my soul mate there was pain and heartache which would help to strip away the last of what was in the way of my being able to see my own true value. And I have this blog which I published every day for almost a year to document my journey, yet another blessing amongst so many wonders and joys.

See you next week!